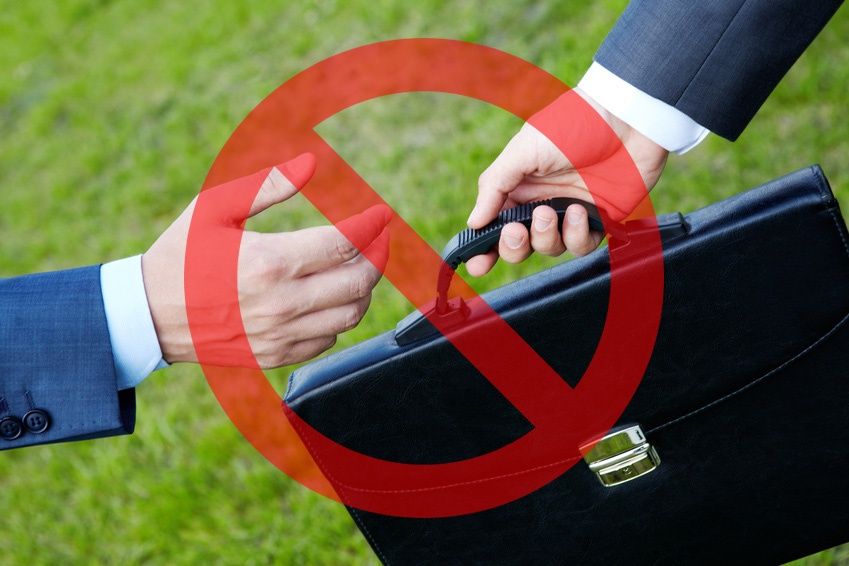 Are you a marketer looking into how to buy leads for cold calling or emailing? I have some advice for you: Don't do it. "Suck it up and do your job" instead.

Hey, don't look at me—I didn't say it! I borrowed that phrase from this brutally honest quote by Mike Volpe, CMO of HubSpot. When asked by a marketer what advice he had about lead purchasing, Volpe said:

“Names on lists are not leads. Doing marketing right, building relationships, and creating love for your company requires some work. Suck it up and do your job, and please stop giving marketers a bad reputation by cutting corners.”

I couldn't have said it any better myself.

To inbound marketers, the thought of buying a lead list is like the sound of fingernails on a chalkboard. Why? Because it's everything we're against. Let me explain.

Well, as Shakespeare might have put it: How do I hate thee? Let me count the ways.

The people on that purchased lead list don't know you or your company, and haven't ever said they want anything to do with you.

Has anyone ever interrupted your dinner with a cold call? Have you ever received an email from a company you've had nothing to do with in the past? I can answer yes to both of those questions. And when it's happened to me, I was hearing what they were saying or skimming what they wrote, but I wasn't listening to their pitch—I was more concerned with how they got my information in the first place. It made me annoyed and frustrated. And I know I can' t be the only one who feels that way.

A good rule of thumb that also applies to marketing is: "Treat others the way you want to be treated." If you don't want to be annoyed with cold calling or email blasts, why would the people on that purchased list?

2. You won't reach anyone "good" anyway.

At best, those names on your purchased lead list might be somewhat interested in your industry. At worst, they're a bunch of random people who couldn't care less about your company or your industry. What good will that do for you?

Unless you're in the process of acquiring an entire company, you're not going to come across a high-quality email list you can purchase. It being for sale at all means that the email addresses on it have already been ripped to shreds by all the other people who have purchased that list, and emailed the people on it. Any email addresses that once had value have since been spammed to the ends of the earth!

I couldn't agree more. Not only have those email addresses or phone numbers been "ripped to shreds," you don't know those people from Adam. It's highly unlikely they're your target audience.

3. Response rates won't be what you want them to be.

Who you really need to reach out to is your target audience. And because a purchased list isn't them, you're going to be completely underwhelmed by the response rate.

In MailChimp's research about single vs. double opt-in email lists (requiring a user to enter their email address only once before opting in as opposed to requiring that user to also confirm their address), they discovered that single opt-in lists have an astonishing 75.6% less total opens. By making it a little more difficult for users to join a list (double opt-in), the ones who don't really care to be on it weed themselves out by not advancing in the process. Even then, the highest-quality double opt-in lists have a somewhat unimpressive open rate of less than 30% and a click-through rate of less than 7%.

How does that relate? If you have a high-quality list of leads who are familiar with your company that have willingly opted in and confirmed their address, and your email click-through rate is still less than 7%, imagine the response you'll get to a list of email addresses that hasn't even opted in in the first place!

It's not just our imagination—take a look at this data, also gathered by MailChimp. These graphs show how the percentage of opens, unsubscribes, clicks, and complaints correlate with the percentage of mailing lists that have been "purchased or scraped." 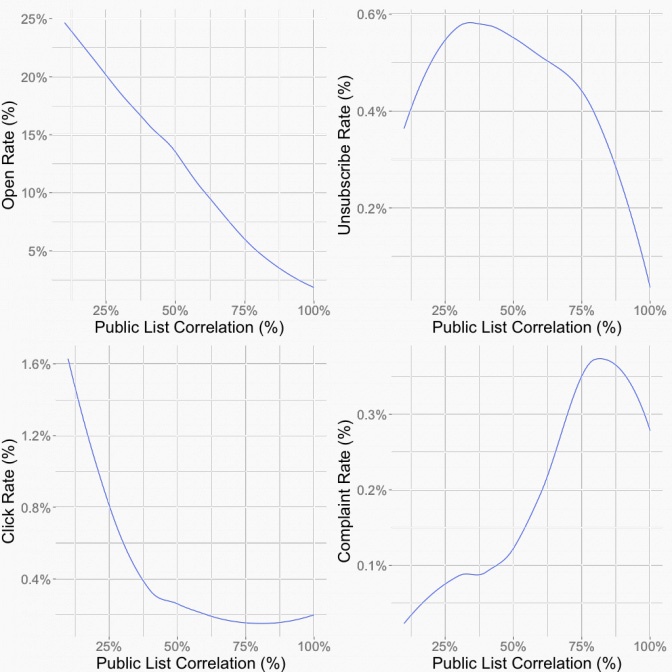 Notice all positive engagement falls off a cliff. The only thing that does go up is complaint rates.

Cold calling statistics aren't anything to get excited about either—in general, cold calling results in about a 2% success rate for getting an initial appointment. However, when that same call is made with a referral, the rate jumps up to 40% and even much higher when that referral comes from within the company.

What can we learn from these statistics? On the most basic level, they teach us that when consumers know about your company, and have opted in or have heard something positive about you, that's when productive interaction happens.

Pursuing someone on a purchased list who isn't even familiar with your company just isn't worth your time or money.

If marketing were a sport, your lead purchasing would make ESPN commentators say, "C'mon man!"

You're better than that.

As of July 2014, purchased lists are illegal in Canada. And while they're still technically legal in the U.S. (for now), that doesn't mean using them isn't shady.

Any reputable email service provider will shut down your account if you use a purchased list. And there are Federal laws in place to protect consumers from unwanted cold calls. Why? Because contacting people with unwelcome solicitation is called "spamming"! It just isn't right.

5. There's a much better way to accomplish your goals.

There are two kinds of marketing—"outbound" and "inbound."

Outbound marketing interrupts a consumer's day. It includes many of the traditional marketing methods you're familiar with—some examples are advertising through TV and radio, marketing on billboards, telemarketing and cold calling, and sending email blasts to lists you've purchased. It's pushing your pitch out there to capture the attention of anyone listening, hoping someone might be interested. Many times, it's a shot in the dark. And it's getting less and less effective everyday.

Inbound marketing is at the opposite end of the spectrum. It's helping yourself "get found" by people already learning about and shopping in your industry. Instead of throwing sales pitches into the void, it's about putting your concentrated effort into making your website a place your prospective customers can go to find answers to their questions (via search engines and social sharing). By focusing your time and energy on creating valuable content for your potential customers, you'll garner their trust, and you'll gain leads that are worth your time. (For more about the inbound marketing process, check out this article.)

Once you've seen the success of inbound marketing in action, the idea of purchasing a list seems like an invasive waste of everyone's time. There's a better, more focused way to market—why not put your efforts into doing that instead?

Be the better marketer.

Like Volpe said, don't cut corners. There's a way to get the right leads, and it's not by buying a lead list. Invest your time and money in a marketing method that's more valuable. Your industry and your customers (and those poor people on those purchased lead lists being spammed to death) will thank you. 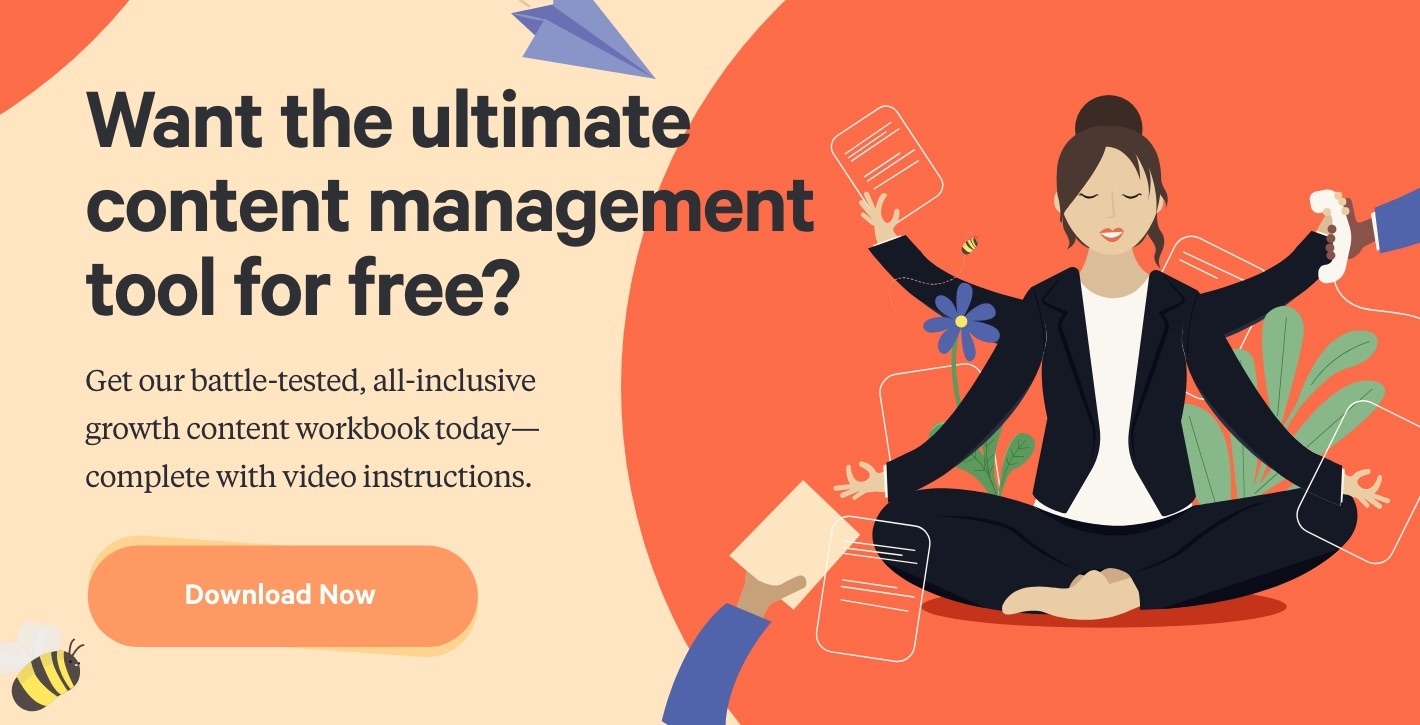